Top of the diagram below is the south (Georgia Avenue) entrance.

That special time of the year is just around the corner!

We need your help to make it all happen, starting in 2 weeks. This should give you enough notice to plan your work schedule.

Everyone needs to take part in something: load in, load out, preparing food, or cook team.

We have 50 team members this year, so that's a LOT of hands to make quick work of it.

That is also a lot of mouths to feed. If you plan to bring a side dish or dessert, there is a link for that sign up page.

SCHEDULE CHANGES
We have a plan, but it has to be fluid. Rain or a delay with scaffolding can mean last-minute changes.

This system will send text or email updates if something changes that affects the tasks you registered for.

If you want to order extra shirts, say so in “Additional Comments” on the form and we will get back to you about the cost.

Ladies, if you want the design on a women’s fitted T, tank top, tube top, etc. buy the item you want and take it to Josh at Winfield’s, 2 S. Main, for printing. There will be a nominal printing cost.

We have to turn in our T-shirt order for printing about three weeks before BBQ Fest. Please get your size preference to us ASAP so we can guarantee a shirt in your size. Filling out the form takes only 15-20 seconds.

One other thing – we said we were going to raise the dues April 1, but we have decided not to. Still 390 individual/580 couple. However, the team is quickly filling up and there will come a time in the next few weeks when we will have to stop accepting members. If you haven’t got your dues in, please use the PayPal widget on the team website or email moodyques@gmail.com to arrange payment by check or cash.

Every year on the last Sunday in April, a fun and debaucherous event happens called Beale Street Wine Race. It’s the service industry’s last chance to blow off some steam before the busy Memphis in May season hits. There are four events – the signature wine relay from which the day gets its name, a grape stomp, an opening parade, and…

a beauty pageant called Queen of the Vine. Women from various restaurants and bars shake their stuff on stage and answer interview questions by that pervy radio host who says “I hate to see you leave, but I sure do like watching you go” about fifty bazillion times over the course of the afternoon. A lot of skin is shown, but here’s the secret – keeping it classy is the key to winning and being crowned Queen of the Vine.

In 2011, a lady named Amanda “Panda” kept it classy and was awarded the QOTV crown. Panda has bartended Bardog Tavern on Monroe for its entire 10-year run, and bartended and served elsewhere in the Memphis area for several years before that. She is a total pro and treats her customers like gold. This year she will bring her outstanding customer service to the Moody Ques, tending our bar during the peak hours of 7 PM to midnight Thursday and Friday of BBQ Fest. 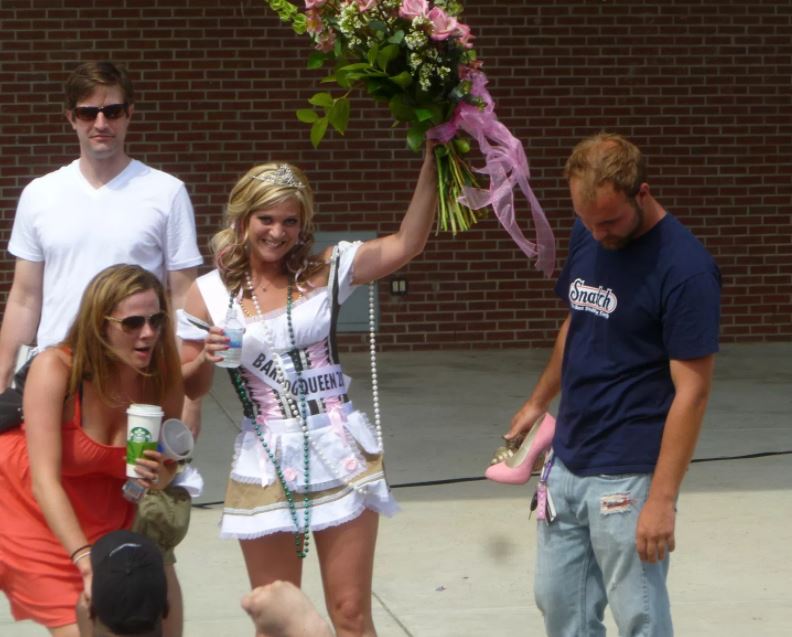 As a legendary Downtown bartender, Panda has no shortage of requests from BBQ teams to bartend. However, last month she approached our team president and director and deputy director of public relations and let us know that the Moody Ques are her preferred team. We quickly put together a deal and hired her. We have no doubt that our members, guests and sponsors including main sponsor DSV will be well taken care of with her behind the bar.

Panda bartends the 3:00-7:00 shift at Bardog Tuesday through Friday. She will be going on maternity leave in a few weeks, and the Moody Ques will be her return to bartending after having the baby. There will be a diaper party for her Tuesday, April 3 at Bardog, 73 Monroe, if you want to stop by and say hello to her. Fellow bartender Bloomers recommends Huggies size 1 or 4 as gifts for Panda.

In other news, team membership is starting to fill up and we don’t have that many spots left. If you haven’t paid dues yet, get ’em in while you still can! You can use the PayPal widget on this site or email moodyques@gmail.com to arrange payment by check or cash.

Back soon with more news. We’re entering the busy season!

Member list will be posted once membership has been closed for 2019.